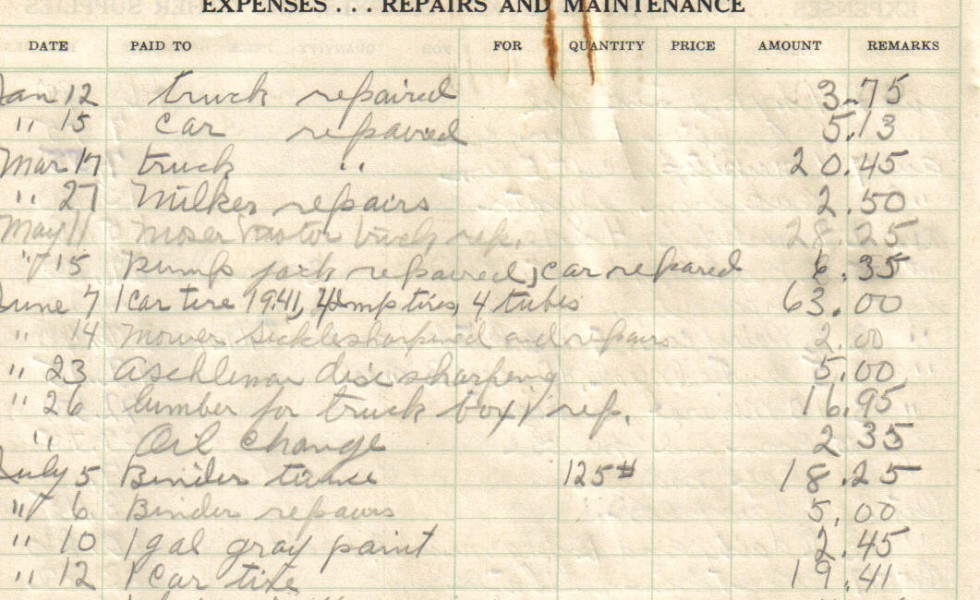 A week or two into every new year, most folks review, often regretfully, their list of resolutions already bent, broken or buried.

That never happened on the big southern Illinois dairy farm of my youth for one simple reason: We never made any New Year’s resolutions.

In fact, I can’t recall one instance that of any one of us—my parents, we six children, Uncle Honey, the many hired men (Jackie, Howard, Monroe, Bob, Bill, Bobbie, Charlie, Orlie…)—on that farm even mentioning New Year’s resolutions let alone making any.

Instead, most of the week between Christmas and New Year’s was spent “doing the books.” The year-end accounting for the farm was a three-day, number-numbing marathon my parents ran from a folding table in the living room, the warmest, least-used room in the house.

The gear they used never varied: huge column-after-column ledger sheets, an ancient adding machine, a raft of pencils, the farm’s checkbook, a bottomless pot of coffee and a grim German resolve to march straight through the endless miles of receipts, cancelled checks and depreciation schedules until victory, a balanced bottom line, was achieved.

It was a serious job and we children knew it. One clue to its joyless duty was that it was the only time we saw our father remain in the house three days straight all year. With a herd of cows to manage and a crew of men to boss, the Boss usually came to the house to eat, shave and sleep. During “the books” he did all three but rarely left.

Another clue was that one of my brothers or me often would be drafted about mid-afternoon to share the evening milking with herdsman Howard. That was Dad’s count-on task but my determined-to-finish mother kept him tethered to the task, cows or no cows.

The bookwork was necessary for two reasons, taxes and, small “c”, congress. Taxes were taxes and you ran the numbers (who knew cows were both taxed and depreciated?) to see what tribute you owed Uncle Sam and the governor. Congress, however, was not Congress on our farm.

Our farm’s congress was the annual meeting of the farm’s four partners, my grandfather, his brother (Uncle Honey) and two other, off-farm businessmen. These sober number-crunchers met the first or second Saturday every January to review last year’s “books,” consider my father’s business plan for the new year, and vote to either adopt, alter or kill both.

The meeting, held in our home and behind a closed door, was a tense time for my parents because it was a three- or four-hour dissection of one year’s work and another year’s dreams. Hope usually trumped dread; in fact, I can’t recall congress ever disagreeing to any of my father’s big initiatives.

And many were big. In the mid-1960s, congress underwrote a complete remodeling of the dairy from a slow, six-cow bypass parlor to a fast, double-six herringbone complete with weigh jars and new 1,000 gal. stainless steel bulk tank.

A couple of years before that, our farm was the first that I knew to buy what was then called a “self-propelled combine.” It was tiny—smaller than today’s pick-up trucks—but that baby Massey was an ingenious collection of gears, belts and augers that somehow threshed wheat and shelled corn while moving. Unreal.

Also, from the mid-1960s through the mid-1970s, an upright silo was built every other year. First came the 50-by-24 poured concrete silo. Three stave siloes, a 60-footer for the dairy cows, a 40 for the heifers and, finally, a 70-footer for the dry cows, followed in quick order.

All were built—as was that farm—on careful planning after an annual, days-long slog through the “books.” Congress, after all, wanted hard numbers and even harder facts, not resolutions.