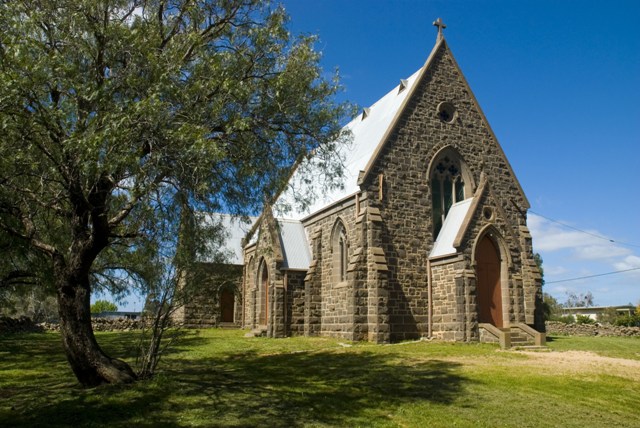 The weekly newspaper from my hometown bring news that the small, rural Catholic church near the big southern Illinois dairy farm of my youth will close its doors next year, a casualty, according to its distant bosses, of too few priests and too many parishes.

It’s a judgment day that many of the old timers mostly likely saw coming but few wanted to recognize or plan for. Churches, after all, aren’t built with any thought of closing. Most, in fact, are built on the opposite thought: eternity.

Reading the news of St. Leo’s fate struck a melancholy chord with a long-ago, one-time neighbor. I’m gonna’ miss this outpost of Rome on the bluff.

It’s not because the small, white clapboard structure overlooking the wide, chocolate-colored Mississippi River bottoms was my family’s church; it wasn’t. We were—are—stiff-necked heirs of the Great Reformer, Martin Luther, Rome’s worst-ever nightmare.

The church, its parish hall and rectory, however, were part of the Sunday morning commute to our church, another 15 miles up the road. That road, St. Leo’s Road, was named after the church, its only landmark. Our Sunday drive took us right past it front door each week just as its worshipers were leaving services.

Back then people were quick to leave church but slow to go home. Often neighbors lingered to catch up on whether the hay one had seen the other mow was now in the barn or if the peach crop was going to amount to much. Kids laughed as they ran in the cemetery and the priest would linger with a flock of perfumed widows on the church’s front stoop.

Lately, however, there are few people left to visit, hardly any children to laugh and play, and a priest who must hurry through the chatter to hustle on to his next service an hour later and two towns over.

Those changes doomed St. Leo’s and many other country churches in the last two decades. It’s a harsh rural reality that church doors close when the Biblical promise of “when two or more are gathered in My name there I shall be” runs up against too few people and too little money.

It’s a law and gospel thing, I reckon. When the Good Book’s gospel of eternal life runs into the law of rural economics, temporal defeats biblical most times.

The newspaper article did not relate if the parish would remain the polling place for all local, state and national elections. Surely church bosses will keep this small service to the community alive because, in fact, there is not one other public building in the whole Brewerville Precinct that could become a substitute.

Whatever its future role might be, families and friends of the old parish are reluctant to let it go.

That reluctance was on full display Saturday, Aug. 3, the last of the more than 100 annual St. Leo’s Church Picnics was held on the church grounds. A huge turnout was expected and that expectation was met: more than 1,300 fried chicken dinners, the picnic’s second most popular attraction, were served to people who drove from as far as St. Louis, nearly 50 miles to the north, to say good-bye.

After this last supper, most then settled into the evening’s main event, bingo, whose most treasured prizes were quilts made by the parish’s quilting club.

A week later the Aug. 11 St. Leo’s church bulletin served notice that, parish or not, the quilting will continue. “We began quilting downstairs in the Parish Hall last Wednesday, August 7,” it announced. “We will meet every Wednesday from 9 am to 3 pm until the end of June ’14.”

They won’t be alone. Across the county road and next to the church, five generations of St. Leo’s faithful lie beneath well-ordered rows of headstones. These dead will guard their little, well-loved parish forever.

Category: From the Column, Life on the Farm, Rural America     Tagged:

Tweet
← From Russia with Love
The Other Red Meat →