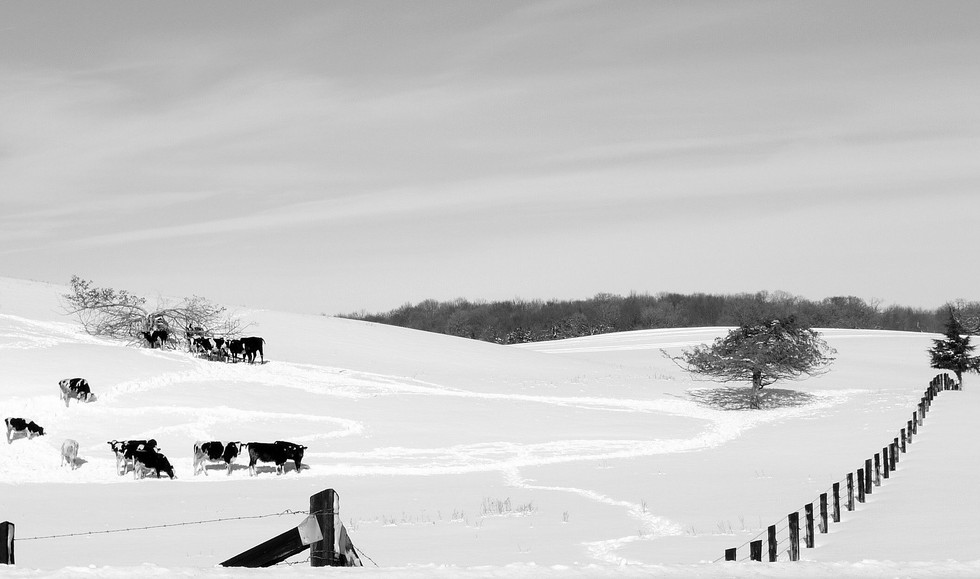 Originally published in 1994, “Howard’s Priceless Gift of Simple Giving” continues to be the most requested, most reprinted Farm and Food File column. The column inspired The Land of Milk and Uncle Honey which will be published by The University of Illinois Press in May 2015.

The Christmas tree was a scrub cedar hacked from the edge of the woods that bordered our farm. Big-bulbed lights, strung in barber pole fashion, generated almost as much heat as the nearby woodstove. Yellowed Christmas cards, saved over the years and perched like doves on the untrimmed branches, served as ornaments.

Howard beckoned me to sit. We had shared this Christmas Day in the dairy barn and it was his request that we share a bit of the night, also. He knew I was alone because my family, his employer, was visiting relatives in town. I knew he was alone because he was always alone, a bachelor for nearly forty years.

“I’ll get us some Christmas cheer,” he offered as I sank into the sofa. In untied work shoes, he shuffled toward the kitchen. A minute later, he returned with two water glasses filled with rhubarb wine. We raised them to the day.

“It’s been a good Christmas, ain’t it Allie Boy?” he asked as he sat in a ladder-back chair by the stove.

I nodded. It had been a good day. Two wobbly newborn calves greeted us when we arrived at the dairy barn, sixteen hours earlier. Wet and shivering, we dried them with the past summer’s straw before showing them how to find breakfast at their mamas’ sides. One was a bull, the other a heifer.

Mary and Joseph? Generally, Howard had only one name for all cows: Succum. None of us knew what it meant or where it came from, but from the time he arrived on the farm in 1965 every cow was always Succum and every calf was always Little Succum. A group of cows or calves were simply Big Succums or Baby Succums.

Silence hung in the stale air. I reckoned that if you had “bached” it for forty years like Howard, silence wasn’t a void that always needed to be filled. So I worked on my wine and said nothing. Howard reached for his pipe and the big red can of Velvet that had been my Christmas gift to him that morning.

“Yep,” Howard said as if to himself, “that’s the prettiest tree I’ve ever had. And this is shaping up to be the best Christmas I’ve ever had because you came by.”

But he had not wanted a favor. All he had wanted was the chance to share his Christmas good fortune with me. He had some wine, a warm fire, his prettiest Christmas tree ever, and a week’s worth of tobacco. He was happy and he wanted to give me some of that happiness.

As I stared at the silhouette of Hoard the Dairyman in the glow of the Christmas lights, I saw a man of great warmth, vast wealth, and pure honesty. He didn’t have a checking account or credit card but he was far richer than the condescending college boy on his sofa.

“Well Hoard,” I said a very quiet minute later, “I better go. We both have to be at the barn early tomorrow.”

Almost forty Christmas Nights later, I have not forgotten the two calves named Mary and Joseph, and Howard’s priceless gift of simple giving.