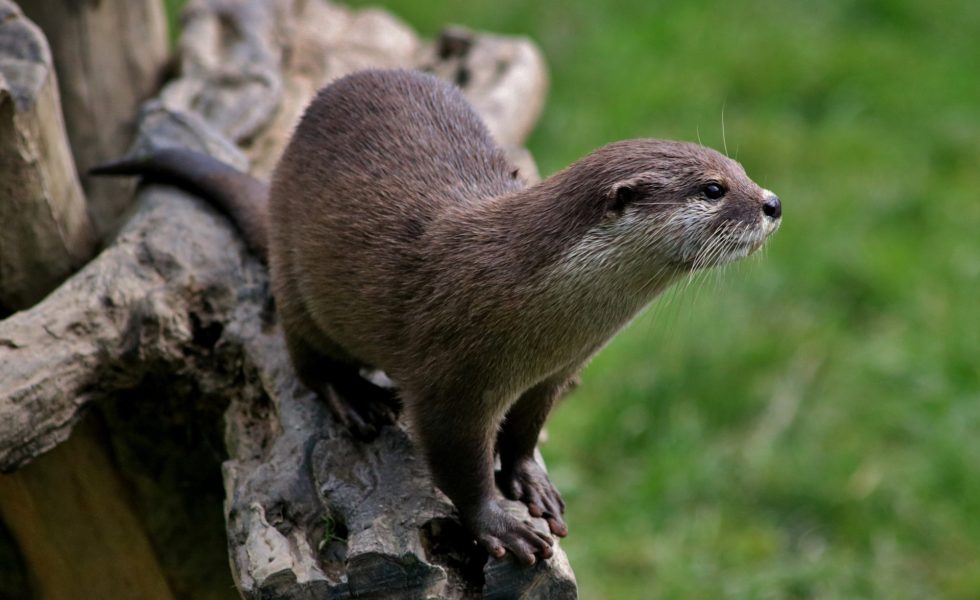 The otter, too small to be a wily adult and too unschooled to be fearful of people, was sunning itself on the ice of a small, city park lake when the lovely Catherine and I, also enjoying the sunshine, spotted it on a late-winter walk. Our surprised voices surprised the juvenile and it made a slinky dash for a hole in the ice to disappear.

A river otter in a city park in corn-and-soy-centric central Illinois? Who would have thought? Certainly not a 1950s vintage farmboy whose youth on a southern Illinois dairy farm featured only the tamest of wildlife: Holstein cows, barn cats, and bin mice.

Wildlife was, in fact, rare on our farm. Whitetail deer were as unseen as Bengal tigers. Quail, once plentiful, were heard daily but seldom spotted. Squirrels, either red or gray, were neither seen nor heard because the farm’s ancient pecan trees were tall islands amid wide-open seas of hawk-patrolled pasture. Cottontails did abound, though, and winter dinners often centered on rabbit and dumplings.

Our farming practices back then—mowed roadsides, fall plowing, 2,4-D-drenched corn fields, set-aside acres choked with giant ragweed, no brush or bush that could hold a snake or scratch a combine—didn’t account for, let alone promote, wildlife. We ran a farm, not a zoo.

And that’s just the way it was. If an animal or plant added economic value, we protected it. If it didn’t, it was a goner.

There was one minor exception. With rivers on two sides and a shallow, lazy slough on its third, the farm was a haven for water-loving muskrats, raccoons, and opossums. My older brothers and I avoided the coons and possums but, during the coldest part of winter, we trapped muskrats in the drainage ditches, pond, and slough.

I can’t remember either needing or getting a trapping license, nor can I remember any solid reason for the hobby other than the muskrats were there for the taking. Since they, like the mice, appeared to serve no useful agricultural purpose, we pursued them like Ahab pursued the white whale.

Unlike mice, however, the muskrats did have value. Their dried, stretched hides brought $3, maybe $4, apiece. That meant one smelly, untanned skin could buy Richard, David, and me a hamburger, chocolate shake, and French fries in town and still have change to restock our BB supply. The very idea of that treat warmed our wet feet and cold hands.

My trapping career abruptly ended one day when I stumbled on the biggest prize any small-time trapper could ever hope to find: a luxuriously brown mink caught—by pure accident—by its tail. It was beautiful and, unscarred, its pelt would fetch at least $20.

Thrilled by the chance to hold both a mink and a wad of cash, I reached to grab the animal behind its head. The tiny mink had its own plan and, like a cobra, sank its two upper fangs into the big knuckle of my left forefinger and retreated before I could even cuss.

Stunned by its lightening, do-or-die defense—and trying to remember if rabies was only sometimes fatal—I swung my only weapon, a small hatchet, at the trapped mink. I missed but, again by pure accident, I hit the trap. The small animal shot away like a speeding brown bullet and with it went any desire to ever trap anything ever again.

I was 13 years old. The bite’s twin scars, still clearly visible, are almost 50. For decades they reminded me of how foolish I was to reach for the frightened, wild animal. Now, however, I see them as proof that nature, if given even the slimmest chance, will fight to the death just to live.

Our only task is to take heed or else we, too, will be permanently scarred.