A Good Life at “Home” 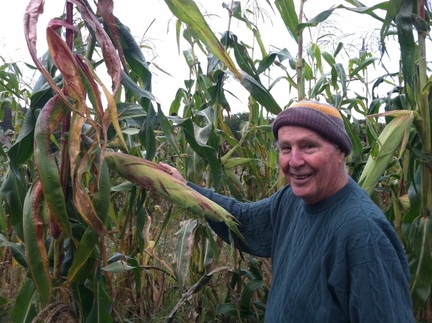 Night has day, up has down, and Hugh Grant has Gene Logsdon.

Writer and journalist Gene Logsdon, as almost no one in Big Ag knows, was the “Contrary Farmer,” an Ohio-based “cottage farmer” with 32 acres of trees, garden, a rotating collection of livestock, a patch of corn, and “about 593,455,780 weeds.” He also authored 25 books of non-fiction, four of fiction, and thousands of magazine stories and blog posts mostly on what he called “the good life on your own piece of ground.”

What this prolific master of American letters and this titan of global ag business have in common is their oppositeness. Grant runs a huge enterprise that gave the world Roundup and genetically modified crops; Logsdon ran a tiny farm that grew open pollinated corn and fed his writing.

Their oppositeness came into focus late last month when, on May 27, Reuters reported Grant would “walk away with a total package of more than $123 million after (the proposed) takeover” if Bayer’s $65 billion offer for Monsanto was accepted.

Four days later, Logsdon, weakened by lymphoma, died in his beloved Ohio, poor in pocket but rich in the satisfaction that he had lived most of his life exactly as he hoped on the farm he and wife Carol had spent 50 years making—by today’s often violent, scientific standards—perfectly imperfect.

And he wrote about that life because writing was his life. In fact, Gene (he was Gene, never Eugene, to everyone) filed his last story on his website, TheContraryFarmer.wordpress.com, just six days before he died. It was pure Gene, another gentle jab at convention titled “Gardening In The Nude (or New Use For Rhubarb).”

He started his career, he once explained, at the top—as a staff writer for Farm Journal—then steadily worked his way down. He happily joined the Philadelphia-based magazine only to discover he hated city life, its long commutes, and what he called 9-to-5 “wage-slavocracy.”

“My anger,” he wrote in his 1998 memoir, You Can Go Home Again, “kept me writing. I would write my way back to open country. But I didn’t know if I could do that. How did a person know if he was writing something good?” he wondered.

What he did know, though, troubled him. “Poor writers with families to feed did not write for themselves, nor for readers, nor for the ages. We wrote for editors.” That meant he had to do stories editors liked and he might hate in order to do stories he liked and his editors might hate. Those rare chances, however, changed him and changed ag journalism.

One centered on Pennsylvania’s family of painters, the Wyeths, who lived on a farm and believed you “had to know a place deeply in order to draw art from it.” Gene came to long for that place, that “home.”

Another story was inspired by a 1971 book of poetry titled Farming: A Hand Book, by a Kentucky writer named Wendell Berry “who had gone back home from the glitter of New York to make his solitary way.”

Another Farm Journal story marked Gene’s break with convention. It was “The Last Farmer,” a 1975 satire that outlined the fictional career of farmer “Marvin Grabacre” as he took the “get big or get out” philosophy of 1970s agriculture to its perfectly absurd conclusion: he farmed all of the U.S. by 2051.

Shortly thereafter, an unexpected royalty check became the down payment on the small-acre, Logsdon farm near Upper Sandusky, OH. Gene and Carol went home, finally, and there, now, he will forever stay.

His books, stories, and unshakeable belief in “home” will live forever, too, because our need to belong, our drive for a place in nature, is equally eternal. As such, Gene Logsdon will be better known a century from now than any corporate folly invented by man.

Tweet
← The “Con” in Econometric
Brexit: “Taking Farmers for Fools” →