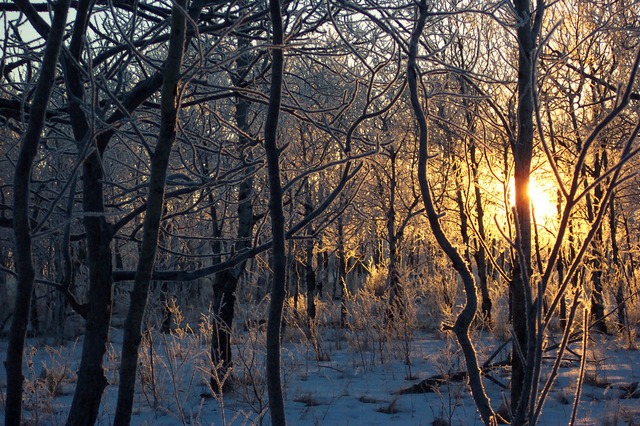 A slightly frayed, white and peach-trimmed quilt now lays unfolded on one of our spare beds. Twenty-nine of its 30 squares each feature the carefully stitched name of one member of the Ladies Aid of Immanuel Lutheran Church in rural Rising City, NE.

The stitching on the quilt’s 30th and final block, also in peach and positioned in the bottom right corner, is testament to its making. It reads: “Aug 1914 Nov 1936.”

Neither I nor anyone I know can explain the “Aug 1914” date. My mother, however, knows exactly what the “Nov 1936” date means. It was the month and year she, her three siblings, and parents left Nebraska to return to their native Illinois after Grandpa lost his 160-acre, Butler County farm to hard weather, hard luck, and hard times.

But that black stain can’t be seen in the quilt’s subtle colors and simple elegance. What comes through clearly, though, is its many names. They are sturdy, solid names like Etta Bauer, Maggie Buck, Anna Poppe, and Eda Hahn.

Sturdy and solid, I suspect, because during the awful, terrible year of 1936, sturdy and solid were all they had left after almost a decade of poor crops and poorer prices. Throughout it, however, the ladies brought their needles, thimbles, and love to their country church to make my grandmother a treasured keepsake I now treasure.

Most of those last names can still be found at Immanuel today. They are chiseled into gray granite and white marble and they stand sturdy and solid still during winter’s fiercest wind or summer’s sweetest breeze.

Only my mother remains to remember the site of her family’s Depression farm and her memories are mostly of a hungry little girl tired of meal after meal of flour pancakes and cabbage. She never looked back or ever went back.

I did last week, however, and through happy coincidence and uncanny luck, was able to talk with the sons of two of the quilt’s makers. Both knew the exact location of the farm my grandparents operated until their lives, like most of American agriculture, unraveled in the 1930s. A stop at the county courthouse yielded an aerial photograph of the farmstead before most of its buildings were razed decades ago to grow corn no one needed then or now.

Three buildings remain; a cobweb-filled livestock barn, a drive-through corncrib, and a sagging, weathered brooder house. None have held anything other than mice, raccoons, and owls since Berlin, not Mexico, had a wall. Thirty yards south, a car-sized hole marks the farm’s collapsed cistern. Nearby, an equal-sized pile of bricks shows where the house once stood.

As I look around, sparse clouds begin to stack against the eastern horizon and a cold wind finds its way through the neglected shelterbelt. A passing shadow, slight and quick moving like my grandfather, sends a chill through me and the pain the land still holds hits my chest like a hammer.

I look to the east to see, just a mile away, the church where the quilting ladies of Immanuel had, more than three generations ago, gathered in warmth and love despite the swirling dust and growing fear. Sunlight strikes the white building to make it look like a dove resting in a brown, thousand-acre nest.

Was this the last image my grandfather saw as he walked off his lost farm 81 years ago? I hope so. Did he cry as he left or was he simply empty after watering the land with years of sweat and tears? I don’t know.

I do know, however, that I will never return to where he still walks.

Category: From the Column, Life on the Farm, Rural America, Traveling     Tagged:

Alan Guebert @AlanGuebert
August 7, 2020 at 9:56am
The WH swears it *loves* trade-dependent US farmers even as it undermines trade deals like the five-week old NAFTA 2.0 it demanded be renegotiated. Why should any nation now look to US-or its farmers-for a fair shake in trade? https://t.co/YEdKjuSzyK
View on Twitter
4
14

Alan Guebert @AlanGuebert
August 4, 2020 at 9:35am
Remember, too, @donpcarr, just hours into his Adm., Trump w/drew from Trans Pacific Part, a trade deal that hemmed in China and opened 40% of world economy to US farmers and ranchers. Costly, spiteful move that cost US ag untold billions. https://t.co/0Mq6GiFViC
View on Twitter
7
31